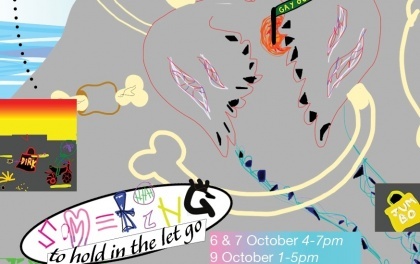 Something to Hold in the Let Go

Something to Hold in the Let Go is a queer-collective-togetherness comprised of five artists whose practices touch upon manifestations of decay, entropy and loss.

Something to Hold in the Let Go is a queer-collective-togetherness comprised of five artists who will spend a week at puntWG from Monday, 3 to Sunday, 9 October 2022. Our names are Clementine Edwards, Dagmar Bosma, Karin Iturralde Nurnberg, Raoni Muzho Saleh and Sophie de Serière. Within our practices we touch upon manifestations of decay, entropy and loss. Our shared interest is in a materiality that does not last or remain fixed, but rather that is in constant transformation.

Where do we find stability amidst the necessary falling apart of things? And how can we reverberate and echo alongside with this shakiness?  Queer-collective-togetherness is a process of disintegration and growth. We will approach the puntWG time samen thinking about the cyclical nature of our lives and practices. Our art practices give us something to hold onto and to ground with, and they allow us to relate to the world in ways queerer than the social norm. At puntWG, we will take time to experiment with the creation of material possibility amidst decay.

We will host three public moments. On Thursday and Friday, we’re open to those curious to visit or join our collective making sessions. On Sunday we host a communal closing with food and drink. Please join us! Keep an eye on puntWG’s website or our IG (@some.thingtoholdintheletgo) for further details. 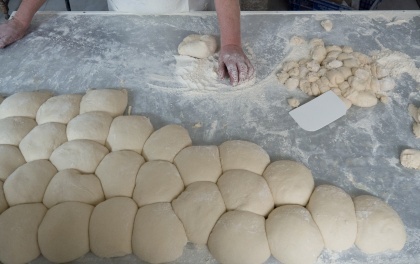 In Massa Mãe artists Asli Hatipoglu and Inês Queirós present the beginning of their research into the relationship between bread making, cloth and its social economic impacts in Portugal.

Massa Mãe is a collaboration between interdisciplinary artist Asli Hatipoglu and textile artist Inês Queirós. The two artists started their journey together in October 2021 in Favaios, Portugal, where bread is an essential source of income and a cultural artisanal trade. In the post-pandemic reality of wheat scarcity, the two decided to dive into the socio-political issues around bread baking and work side by side with one of the local bakers named Rosario. The day would start at 4 am, preparing the dough needed to bake 600 loaves of bread a day while sharing stories and local wisdom.

At PuntWG, Inês and Asli will present the beginning of their research into the relationship between bread making, cloth and its social economic impacts. Ines will showcase textile studies that imprint the surroundings of Favaios and its bread-making rituals, while reflecting upon cloth as a vessel, a shield and a carrier. Asli will share a work-in-progress video project that documents her participation in the daily routine of the bakery with Rosario. She focuses her concerns on the relationship between the body and food, bringing attention to the ways in which physical repetition in bread baking influences the embodiment of the baker. As opposed to the industrialization and mechanization of modernized bread making, Asli considers the manual kneading and baking  process as a space for reflection and meditation. Through their eyes, wheat becomes a broader subject than just bread, and functions as a vehicle to reflect on the future of our ecology, health and socio-economic stability. 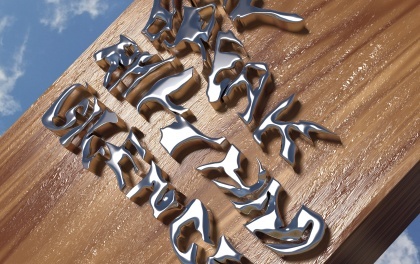 Bram Ieven and Ektor Ntourakos collaborate in Day Break Rhythm Silence, a sound installation to map the cultural and social interactions in the area of Rotterdam South.

Bram Ieven and Ektor Ntourakos collaborate in a sound installation to map the cultural and social interactions in the area of Rotterdam South. Concentrating on the inner courtyard of one specific housing complex, which facilitates private and rental households and small businesses, the installation ‘Day Break Rhythm Silence’ explores the emergence of a new type of public space. Starting from field recordings from the courtyard, Ieven and Ntourakos introduce ambient syntheses that highlight the sonic compositions in the social exchanges between the residents, but also between the residents and the material environment, as constitutive elements of a public space. The installation induces the visitors to conceive public space as a fluid and ambient social scape with an affective, aural presence that can invade even our most private spaces and institute its public and social rhythms at the heart of our own private lives.

Artwork in photo by Ektor Ntourakos 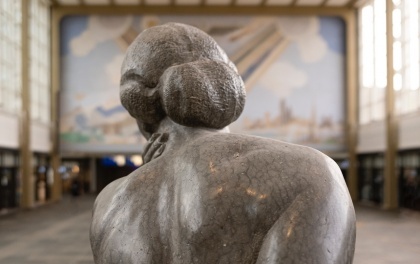 Terugblik / Retrospect
Itamar Gov presents the research and work completed during his residency at airWG between July and September 2022 about public space, monuments, indifference, and the memory of latent state violence.
Curator: Àngels Miralda
16 till 25 Sep 2022

A nude woman rests her chin against her curled knuckles, one leg stretches in front of her. The stone-carved sculpture by Dutch artist Theo van Reijn from 1939 still sits today, overlooking the commuters and travelers that pass through Amterdam’s Amstel Station. She is named Terugblik (Retrospect) and her blank eyes gaze over the sea of faces that only emphasize her own boredom and emptiness for over 80 years.

In 1942, the official photographer of the Dutch National Socialist regime Bart de Kok was sent to document the organization and procedures of state inspectors. Terugblik became the subject of one of his photographs. In it, she stares vacantly into the station above the heads of a crowd of Jewish Amsterdammers who were gathered at the station and would imminently be transported to the labor camp Molengoot, on the German border.  From there, after months of forced labor, they were separated into concentration camps in Poland.

Neither the sculpture nor the photograph in itself present readily identifiable forms of violence, yet, when examined closer they document the lethal indifference of state infrastructure towards specific groups of people. The exhibition contrasts the context of Terugblik today and in 1942 to reveal the continuities from that time that still inhabit public space. In a time when monuments have repeatedly been questioned, Terugblick defines the indifference of the stone witness.

Itamar Gov approaches forgotten micro-histories in order to shed light on vast socio-political landscapes. Gov’s projects start from an inquiring skepticism towards cultural traditions, conventions and gestures that are considered self-evident. His works are based on ongoing research and revolve around the intersection of art and politics, highlighting the strong tension between the known and the supposed, and challenging any assumption of clear borders between facts and falsehoods, reality and imagination. He was a member of the curatorial teams of Documenta 14 (Athens/Kassel), Haus der Kulturen der Welt (Berlin), and the Fondazione Adolfo Pini (Milan). He was awarded a residency grant at the Cité Internationale des Arts (Paris) in 2021, and has recently presented/exhibited his works at the Mardin Biennial (Mardin), Palazzo Butera (Palermo), Zilberman Gallery (Istanbul) and documenta 15 (Kassel). 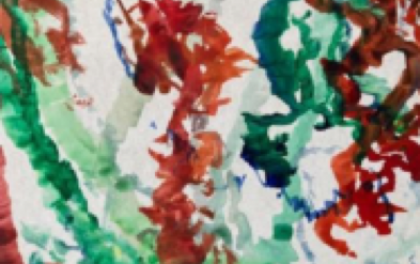 puntWG will be transformed into a work station as a group of designers and artists try to  understand how to deal with the visible and invisible workings of viruses.

Under the title First Studies in Virology - Designing a New Disease, a collection of  drawings, paintings, sculptures, animations, and network cartographies will gather in puntWG. The space transforms into a work station with raw materials,  tape, glue, models of viruses, papers, network diagrams, computer screens and  organised talks. A group of designers and artists will be busy trying to  understand how to deal with the visible and invisible workings of viruses.